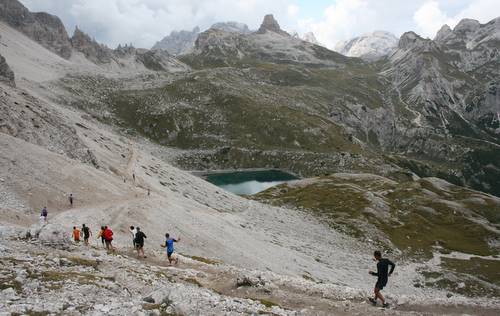 The race started in Sexten (Italian: Sesto), a very popular holiday and ski resort located at an elevation of 1,320 metres. Although in Italy, most people in this region speak German as a first language.

The event included 1,350m of vertical gain over a 17.5km route. The first 7.5km were mildly uphill on asphalt and dirt roads along the lovely Fischlein Valley but then competitors faced a tough 7km climb into the barren and bizarre landscape of the Dolomites.

The highest point on the course was at 2,528m, where participants noticed that their performance was affected by the reduced oxygen content of the air.

Next came a very steep downhill section which demanded superior trail running skills as it was mostly on loose terrain. The final 500m were uphill again. From the finish at the Drei Zinnen mountain hut (2,405m), there were splendid views of the majestic Three Lavaredo Peaks. 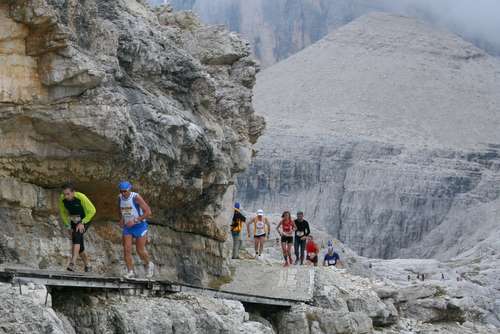 Everything went smoothly. The goody bag contained a technical T-shirt and some South Tyrolian specialities. The four feed stations on the route were well-stocked and well-run by friendly and experienced helpers.

Personal clothing was carried by helicopter to the finish, and the bags were sorted according to the start numbers, so that all finishers could change clothes quickly.

Participants indulged in the finisher buffet for hours. The wide selection of delicious cakes was most popular, followed by fruit, yoghurt and mixed nuts.

Well-nourished, the field marched down to the valley. On the way, fruit schnapps was provided to help digestion. Shuttle buses brought the former runners, now a bit sleepy, back to the start area in Sexten where pasta, beer, fruit and more cakes awaited those who were still able to eat. 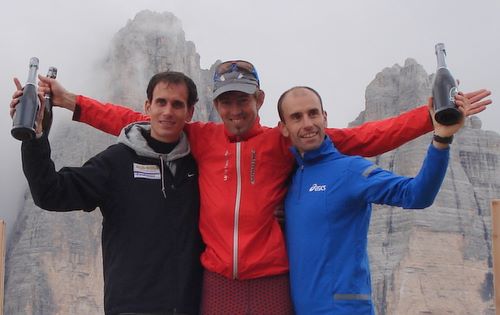 Overall, 633 men and 102 women made it to the finish, and more than 150 young athletes took part in the children's races.

The men's race was an exciting affair. Timo Zeiler (28) of Germany was the only of the top four finishers who had not taken part in the gruelling "Dolomitenmann" competition the day before. Consequently, he proved the strongest on the steep section of the route and won the "Bergpreis" for the first athlete at the highest point on the course.

His pursuers, however, stayed in sight and came closer and closer.

Helmut Schiessl, who works full-time as a carpenter, now focuses exclusively on mountain races, in contrast to Timo Zeiler, who also takes part in road races up to the half marathon distance.

New Zealands's seven-times world champion Jonathan Wyatt (37) secured fourth place, shortly after winning the Dolomitenmann mountain race in Austria and just one week after his victory in the Jungfrau Marathon in Switzerland. 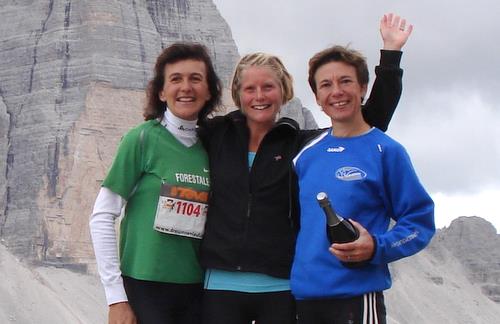 On the women's side, New Zealand's Anna Frost (28) took control of the race on the steep uphill section. She passed her main rivals with ease and opened a comfortable gap, which was important because she's "a bit of a wimp" (as she said later) when it comes to downhill running.

Furthermore, she was trailed by top-class downhill runner Maria Grazia Roberti (43), who had won the bronze medal in last week's up-and-down World Championships. Nevertheless, at the end the Italian had to be content with second place, ahead of another exceptional masters athlete, 45-year-old Daniela Gassmann-Bahr of Switzerland.

Anna Frost has been touring Europe in a camping van for several months but she hasn't raced much this year due to a long-lasting knee injury. We'll see her competing again in Central Europe in the Šmarna Gora Mountain Race in Slovenia in October 2009.