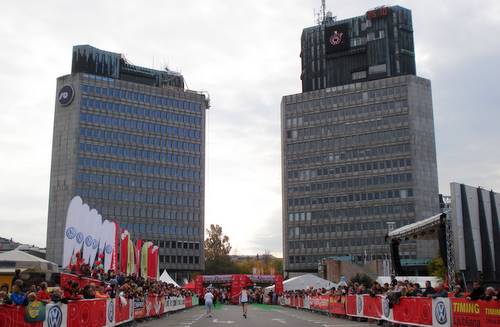 The growth rate of Slovenia's largest running event is impressive. In 2008, more than 5000 took part in either the half or the full marathon, and another 3800 runners (almost 2000 of them women) participated in the 10k race (9.2km in 2009) which starts two hours earlier.

This year, the race features a new course. As it suits a massive event, the race starts off in front of the massive 1950s Parliament Building and finishes nearby on the huge concrete car park of Trg Republike ("Republic Square") in front of two enormous office blocks.

The 21km route is very mildly undulating and takes you clockwise through the residential area of Vič, around the Rožnik hill, and then through the suburbs of Šiška and Bežigrad.

The full marathon consists of two laps. Be aware that the time limit for the first lap of the marathon is 2hrs 15min!

You don't run through the beautiful old town with its narrow cobbled streets but it's so close to the finish area that many runners go there for a stroll, coffee or lunch after the race.

The late start at 10.30am gives participants plenty of time to travel to Ljubljana on the day. However, it makes it more difficult to run a fast time, in particular if you consider that the night before the clocks jump one hour backward due to the end of European Summer Time, and 10.30am feels like 11.30am.

In 2008, African athletes controlled the men's race with Ethiopian Amare Mulu claiming victory in 2:14:41, followed by nine Kenyans and one Ukrainian runner. Tatyana Mesentseva of Ukraine led the women home in 2:37:13.

Start: Šubičeva ulica (in front of the parliament)

Finish: Trg Republike (very close to the start, opposite of the parliament)

* 4 EUR off if you bring your own Championchip; 5 EUR off for groups of 10 or more runners

Prizes: medals to the first 3 in the categories in all races; marathon: prize money to the first 10 M/F and to the first 5 Slovene finishers (prizes are not cumulative)