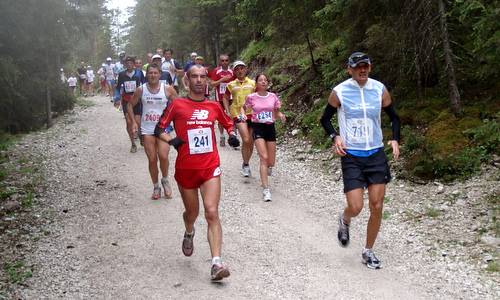 With over 3500 finishers last year, the Cortina-Dobbiaco Run is the most popular running event in the Dolomites in northern Italy.

The race is a very scenic 30km point-to-point run on a disused railway track. The first half goes about 300 metres uphill, the second half around 300 metres downhill.

The start is in the upmarket ski resort of Cortina d'Ampezzo in the Veneto region.

The finish is in the village of Dobbiaco (German: Toblach) in the autonomous province of South Tyrol, where German is the predominant language.

Participants run through tunnels, across wooden bridges, and past alpine lakes, mostly on dirt roads and trails.

Finish: at the Grand Hotel in Dobbiaco/Toblach (1256m)

Entries: online or by post, fax or e-mail; entries close 31 May 2012 or when entry limit of 4500 runners has been reached; entrants may have to provide a medical certificate at registration and pay an additional € 7 if they are not members of an Italian athletics club

You get: goody bag, medal, timing chip rental, bus service before and after the race, transport of personal clothing from the start to the finish

Showers and changing facilities: at the finish

Prizes: to the first 30 men and 15 women, to the first 5 in each category (prizes are not cumulative), and to the 10 largest groups