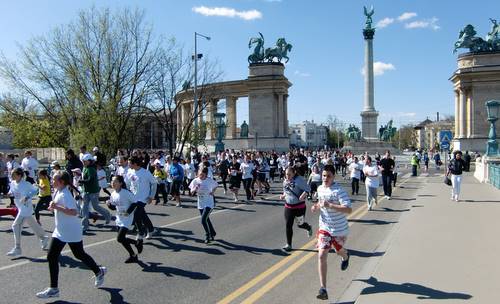 With more than 12,000 participants last year, the Vivicitta Budapest is one of the biggest running events in Hungary. The event comprises races of 3.5km, 6.5km and 11.2km, and for the first time also a half marathon.

Due to construction works at one of the Danube bridges the event cannot take place as planned on Margaret Island in the River Danube. Instead, start and finish will be in the large and pleasant Városliget (City Park), which is also home to the Budapest Marathon in October.

The route is flat and fast and passes many of Budapest's key attractions. Competitors run along Andrássy Avenue (a World Heritage Site), past the Parliament building, across the monumental Heroes' Square, and through the City Park with its lakes, thermal baths and a fairy-tale castle.

Timing: ChampionChip - no chip rental fees but 1000 HUF deposit (fully refundable); 500 HUF off the entry fees if you use your own chip