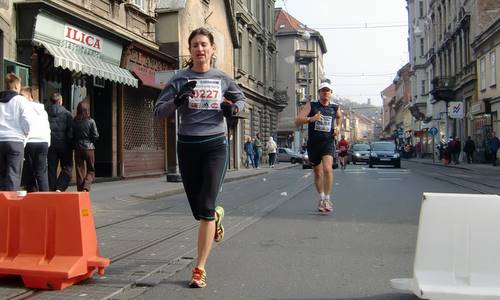 Public acceptance is low, however, and it's not uncommon that locals loudly complain about the city centre being closed to traffic during the five-hour event.

Participants pass Jelačić Square several times as the course goes out-and-back to the eastern and then to the western parts of the city.

The half marathon consists of one lap, the full marathon of two laps.

At first, the route runs approximately 8 kilometres along a wide and wind-prone road very mildly uphill to the eastern suburb of Dubec. It passes Croatia's largest football stadium "Stadion Maksimir" and the zoo, which is in the leafy Maksimir park.

You get: T-shirt; 21k and 42k runners also get a medal and a warm meal