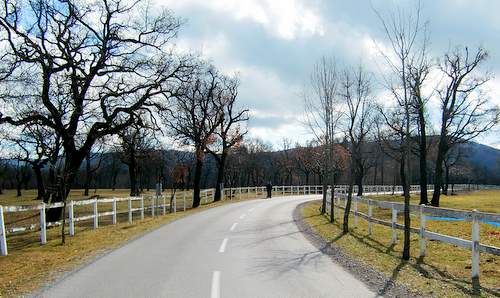 The first major running event in the Slovene race calendar is held in March on the beautiful Karst limestone plateau, just a few kilometres from the Adriatic Coast and the Italian port of Trieste.

Last year, more than 2600 runners participated in the half marathon and the 8.45km race.

The start and the finish are in the small town of Sežana (Italian: Sesana).

The attractive, undulating half marathon route travels through the fields of the stud farm of Lipica, the origin of the Lipizzaner horses, and then across the Italian border. Almost 9 kilometres are on Italian soil. You run back to Sežana on a nice cycle path. A short section is on a trail. The difference between the lowest and the highest point on the course is around 100 metres.

The event also incorporates a race walking competition on the track as well as a guided walk.

Entries: online or by post; entries close 14 March; no entries on the day!

Race centre: in the sports hall at the start (open from 8.30h)

Showers and changing facilities: in the sports hall (no baggage storage!)

Award ceremony: 13.30 in the sports hall