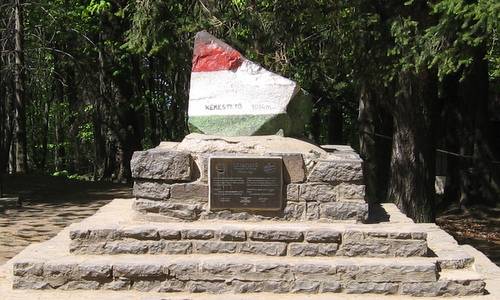 With almost 1200 participants, last year's uphill race to the top of Hungary's highest mountain proved to be more popular than most running events in the Alps.

Hungary has a reputation of being very flat but the western half of the country is mostly hilly terrain, and in the north there are some proper mountains.

Mount Kékes (Kékestető) is located in the Mátra Hills, less than 100 kilometres to the north-east of Budapest. It's one of Hungary's top tourist attractions as it features two ski pistes and a television tower with a view platform. The summit is at 1014 metres above sea level.

The Kékes Peak Run includes an elevation gain of 671 metres over an 11.6-kilometre route.

The start is in the spa village of Mátrafüred at the foot of the mountain. The route is more or less a gradual climb along the road to the village of Mátraháza, where it turns right and becomes a bit steeper.

At the finish, all runners touch a rock which is painted in the colours of the Hungarian flag.

You get: goody bag, transport of personal clothing to the finish