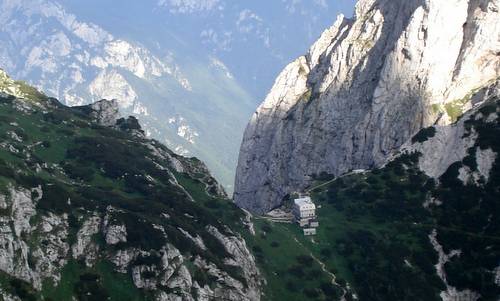 That's the course! You will pass the mountain hut on the Kokra saddle (Kokrsko sedlo, 1793m) after 6km.

This mountain race in Slovenia is a gruelling competition with an elevation gain of 1957 metres in less than 10 kilometres - an average gradient of about 20 per cent. The finish is on the summit of Mount Grintovec (2558m). Only for experienced mountain runners!

The Grintovec race is a major event in the Slovene race calendar. It's the second race of the WMRA (World Mountain Running Association) Grand Prix, and many world class runners have made their way to the hamlet of Kamniška Bistrica at the foot of the impressive Kamnik-Savinja Alps, 37km to the north of Slovenia's capital Ljubljana. The course records are held by New Zealand's Jonathan Wyatt (1:15:43) and Anna Pichrtova from the Czech Republic (1:31:50). 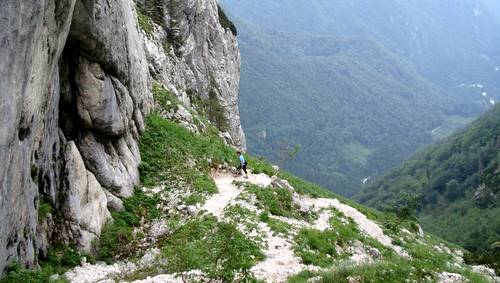 The start is at an elevation of 600 metres next to an inn and a small lake in a deep gorge.

The first 3km or so take you on dirt roads and trails to the end of the gorge and serve as a warm-up for the long and steep climb that follows.

The next 2km are on a narrow trail through thick forest which clears at about 1650m. The trail continues through stabilized scree to the mountain hut on the Kokra saddle (Kokrsko sedlo) at 1793m. You can pick up your personal clothing here after the race but don't think about that now, it's still almost 4km with a vertical gain of 760m to the finish. 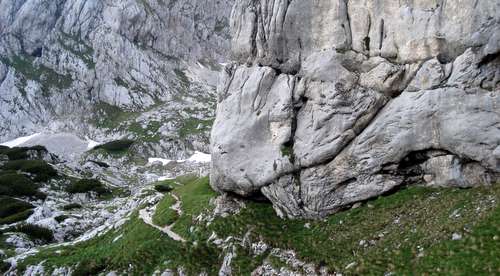 You are now in a spectacular and unspoilt high Alpine landscape. At first, the route levels out a bit and you run on a mixture of grass, dirt and rock, but soon begins the long final ascent across a huge scree field to the top of Grintovec (2558m). 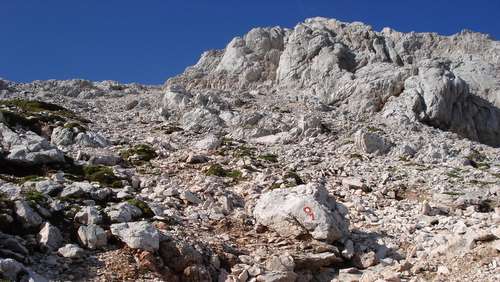 Overall, there will be seven drinks stations on the course and a lot of hikers will cheer you on. Most competitors power walk most of the route. However, the use of trekking and nordic walking poles is not allowed in the race.

The most difficult task might be the long walk down to the start. On hot days, the ice-cold waters of the lake are very welcome to cool off.

Entries: advance entries from 10 July until 24 July; late entries on the day until 8.00am

You get: a present, transport of personal clothing to Kokrsko sedlo (1973m), a warm meal after the race

Award ceremony: 15.00 (in the mountain hut in Kamniška Bistrica)