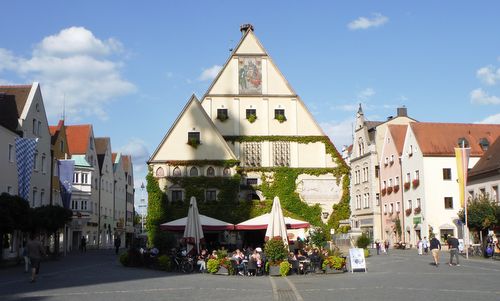 The Freundschaftsmarathon ("Friendship Marathon") follows a scenic point-to-point course through the rolling hills of the Oberpfalz (Upper Palatinate) region in Germany's state of Bayern (Bavaria).

These races are available:

In 2017, the 42.2km marathon will be started on the edge of the town of Weiden in der Oberpfalz (pictured).

The route will take the runners through rural areas, small towns and villages to the finish on the main square of the Old Town of Amberg.

The half marathon will begin in the small town of Schnaittenbach, at the halfway mark of the marathon.

The difference between the lowest and the highest point on the marathon course is 90 metres. From start to finish, the route features approximately 400 metres of ascent and 400 metres of descent.

In 2015 (the Freundschaftsmarathon takes place every second year), the event had approximately 1,000 finishers. The marathon was run in the other direction, from Amberg to Weiden. Angelo Spörl (2:41:46) and Katja Deppisch (3:33:19) were the fastest finishers.

The time limit to finish the 42.2km marathon is five hours.