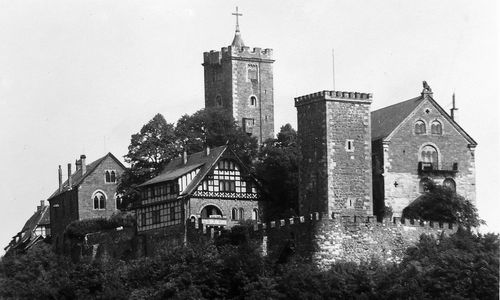 The Wartburg, one of Germany's most prominent castles, provides a magnificent backdrop for the Wartburglauf, a challenging 12km-long trail race that is held annually on the edge of the town of Eisenach in the state of Thüringen (Thuringia) in Central Germany.

Starting and finishing at the Wandelhalle, a historic spa building which is situated in a landscaped park near the castle, the race takes the runners on forest trails up and down the foothills of the Thüringer Wald (Thuringian Forest) mountain range.

The difference between the lowest and the highest point on the course is about 170m.

In addition to the 12km run, the event offers a 12km nordic walking race, a 6.1km run, a 3km run and two children's races.

The Wartburg plays an outstanding role in German history as Martin Luther was hidden in the castle for ten months in 1521-1522. During his stay, he translated the New Testament from Greek into German, paving the way for modern written German.

Entries: online or by post (up to 20 September 2017); late entries on the day; reduced entry fees for minors