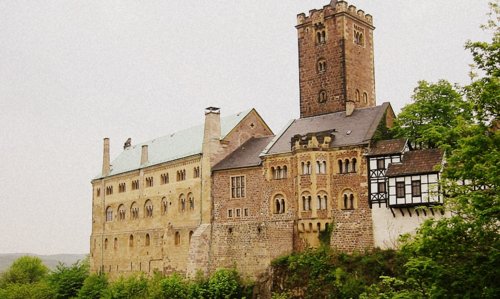 One of Germany's most prominent castles, the Wartburg, provides a magnificent backdrop for the Wartburglauf, a trail running event held annually on the edge of the town of Eisenach in the state of Thüringen (Thuringia) in Germany.

Starting and finishing at the Wandelhalle, a historic spa building situated in the landscaped Kartausgarten park, approximately two kilometres from the castle, the event offers races for the whole family:

The main race of the day is the 12km run which features a challenging route on forest trails through the foothills of the Thüringer Wald (Thuringian Forest) mountain range. The difference between the lowest and the highest point on the course is about 170 metres.

The Wartburg plays an outstanding role in German history as Martin Luther was hidden in the castle for ten months in 1521-1522. During his stay, he translated the New Testament from Greek into German, paving the way for modern written German.