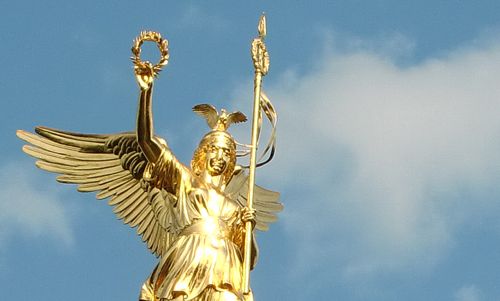 Entrants to the Berlin Half Marathon are strongly advised to register as early as possible for the race. All 30,000 bibs for the 2014 edition of the event had been sold out in December 2013 already — three and a half months before the start.

The route is mostly flat and fast on wide roads and boulevards.

Starting and finishing on Karl-Marx-Allee, a monumental socialist boulevard in the eastern part of Berlin, the route is very scenic as it passes many landmarks in both the former West and East sectors of the city.

The route visits, for instance, the grand buildings on the ‘Unter den Linden’ boulevard, the famous Brandenburg Gate, the vast Tiergarten park, the Berlin Victory Column (pictured), the magnificent Charlottenburg Palace, and the Kurfürstendamm boulevard.

Start and finish: Karl-Marx-Allee (near Alexanderplatz)

Showers and changing facilities: in tents in the start/finish area