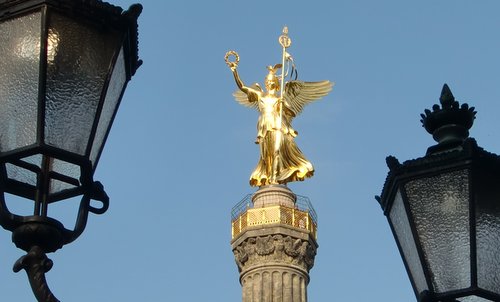 With around 30,000 finishers, the Berlin Half Marathon (German: Berliner Halbmarathon) is one of Germany's biggest running events.

You will need to register early. Every year, the race sells out well in advance.

In 2019, the start/finish area was moved from Karl-Marx-Allee in the eastern part of Berlin to Straße des 17. Juni, the main avenue through the vast Tiergarten park in the western part of the city.

The start and the finish lines are approximately 1,300 metres apart (see map below).

The route visits many landmarks in both the former West and East sectors of the city, such as Schloss Charlottenburg (Berlin's largest palace), Checkpoint Charlie (one of the biggest tourist hot spots in the city) and the grand buildings on Gendarmenmarkt. It also takes the runners along the Kurfürstendamm and the Unter den Linden boulevards as well as through the Brandenburger Tor.