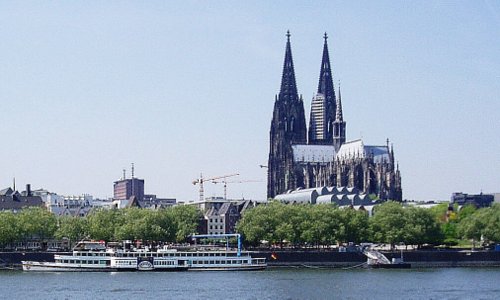 With more than 5,000 finishers in the marathon, 11,000 in the half marathon, and 500 relay teams, the Köln Marathon is one of Germany's biggest running events.

Held in Cologne (German: Köln), a city of a million people and home to one of Europe's largest street carnivals, the event is popular for its cheerful atmosphere and excellent crowd support along the route as well as for its flat and fast course.

The half marathon starts off at 8.30am, ninety minutes before the full marathon.

Both routes wind their way through different parts (or "Veedel") of the city, starting in Köln-Deutz on the right bank of the River Rhine and finishing at Germany's most-visited monument, the Kölner Dom (pictured) in the city centre.

The time limit to complete the course is two hours fourty-five minutes for the half marathon and six hours for the marathon.

You get: transport of personal clothing from the start to the finish area; finisher medal; free use of public transport in the Rhein-Sieg region on the day of the race