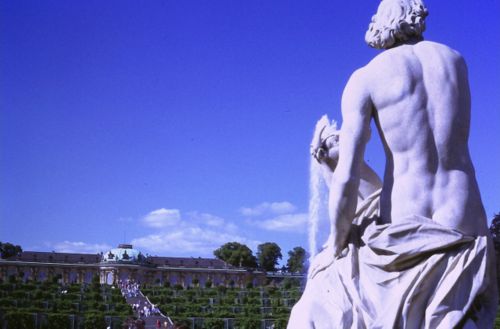 The Schlösserlauf ("Palace Run") attracts around 4000 runners and walkers to the city of Potsdam, an old and very green city of 160,000 people, situated on the edge of Germany's capital Berlin.

The event offers two very scenic routes, a 10k and a half marathon, which are both open to runners, walkers and nordic walkers.

Starting and finishing on the athletics track of the ‘Sportpark Luftschiffhafen’ on the western shore of the Templiner See (one of twenty lakes in Potsdam), the route takes runners to the city's grandest sights and most scenic spots.

Competitors run through landscaped parks and gardens, alongside lakes, past the triumphal arch of Brandenburg Gate (not to be confused with the famous one in Berlin), across Glienicke Bridge (where the Soviet Union and the United States exchanged a number of spies during the cold war), past Schloss Cecilienhof (the palace where Churchill, Truman and Stalin met after World War Two for the Potsdam Conference), through Alexandrowka (a small Russian enclave with lovely wooden houses), and finally through Park Sanssouci (pictured) with its magnificent palaces — the summer retreat of Frederick the Great, King of Prussia.

You get: T-shirt (not guaranteed for late entries for the 10k), goodie bag, chip timing, finisher medal and certificate, massage service after the race; pasta party (21km)