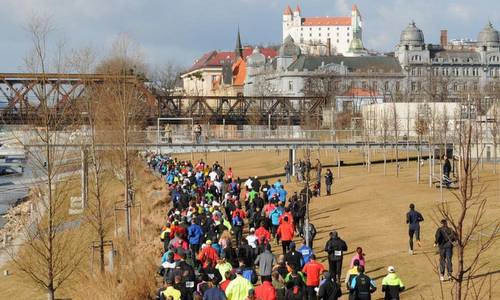 The Winter Tour 2014 consists of three Winter 10k Runs (‘Zimné desiatky’) through the city centre of Slovakia's capital Bratislava which is situated on the River Danube, very close to the border with Austria.

The route is a very scenic 10.2km loop that takes runners along both banks of the Danube and across two imposing bridges, mostly on cycleways and footpaths.

Entrants to the third event can choose to run either one or two laps (20.4km).

You get: chip timing, baggage storage, drinks and fruit on the course and at the finish; free parking in the underground car park at the Eurovea centre

Prizes: to the first 3 M/F in each race; to the M/F winners of the Winter Tour