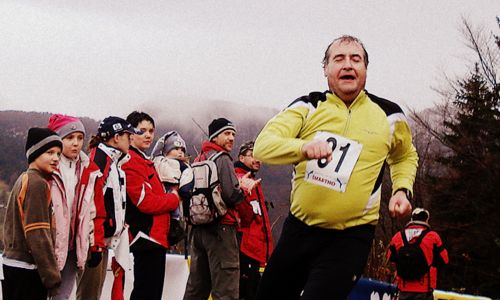 The Miklavžev tek (Saint Nicholas Race) is an atmospheric running event, held annually in early December in the foothills of the Kamnik-Savinja Alps in Slovenia.

Participants run 5.36km of an uphill route which includes about 300m of ascent. The 1.41km children's race features 90m of elevation gain.

Starting at the thermal spa of Terme Snovik, the route runs on a mix of asphalt roads and trails up to the finish line at the church of Sveti Miklavž (Saint Nicholas) which stands at about 750m above sea level on top of a wooded hill.

After the race, participants get free entry to the thermal pools of Terme Snovik.

Start: 10.00 at Terme Snovik (children start higher up the course)

Finish: at the church of Sv. Miklavž (Saint Nicholas)

You get: transport of personal clothing to the finish (at 9.30); T-shirt; snacks and drinks after the race; entry into the post-race prize drawing; free entry to the thermal pools of Terme Snovik (to the first 400 entries)