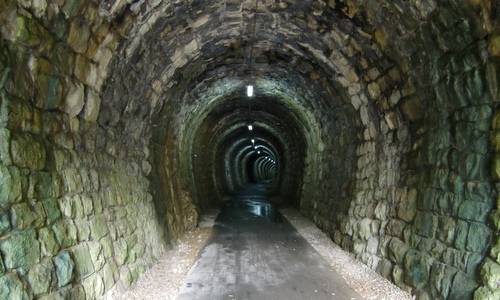 A new marathon running event will be held in mid-April 2014 on the Istrian peninsula in the northern Adriatic — the Istrian Marathon.

The event offers an 8.5km race, a half marathon, and a full marathon.

Starting and finishing on the seafront in the port of Koper in Slovenia, the course will be rather challenging with several testing hills but it will be very scenic and varied.

Most of the race will be run on asphalt roads or cycleways. Some sections will be on trails and other terrain.

Participants will run along the Adriatic coast, through the picturesque old coastal towns of Izola and Piran, past the salt pans of Strunjan, and through the resort of Portorož. A good part of the race will be run on the disused ‘Parenzana’ railway track through vineyards, rural areas, and former railway tunnels (pictured).

The marathon route is mostly out and back whereas the half marathon is a point-to-point race from Piran to Koper. The 8.5km race is one loop around Koper.

At the time of writing this article (three months before the race), almost 1000 runners have registered for the event already. The entry limit is 2000 runners!

Entries to the 8.5km run have been closed.

Start (21km): at the Fornače car park in Piran

Finish: at the Taverna building in Koper

Timekeeping: ChampionChip — € 3 off the entry fees if you use your own chip (!)