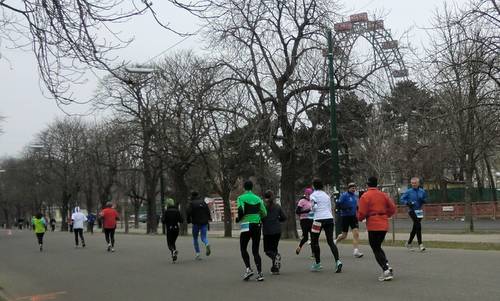 Each event offers a 7k, a 14k, and a half marathon. The event in February also features a 28k.

Starting and finishing near Austria's biggest stadium, the Ernst-Happel-Stadion, the race is run mostly on Prater Hauptallee, a wide avenue through the park.

The course is traffic-free, AIMS-certified, and pancake-flat.

Timing: ChampionChip - use your own chip or rent a chip (chip rental fees apply)

You get: snacks and drinks; medal and T-shirt to participants in all three Eisbärlauf events

Prizes: trophies/medals to the winners of each category