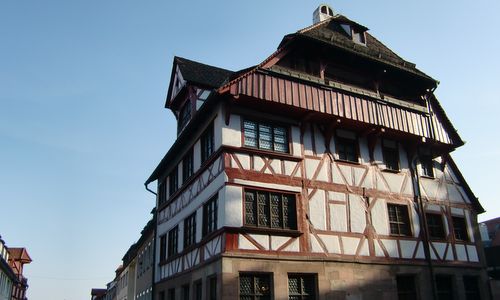 Held annually on New Year's Eve in the city of Nürnberg (Nuremberg) in Germany's state of Bavaria, the Nürnberger Silvesterlauf attracts around 1500 runners.

Entrants can choose between the 5k or the 10k race.

The route is a 5km loop around the Wöhrder See, an artificial lake in the eastern part of the city. The course is mostly flat on footpaths through parkland along the shore.

Steeped in history, Nürnberg is a lively city of half a million people, and well worth a visit for its many reminders of its turbulent past, its outstanding museums, its beautiful half-timbered buildings (pictured), and its culinary delights.

Start and finish: at the Sebastian Spital, Veilhofstrasse 38, Nürnberg

Entries: online (up to 26 Dec 2012); late entries until one hour before the start; entry limit: 1213 participants in each race

You get: chip timing, hot and cold drinks; entrants can order a technical T-shirt for € 10