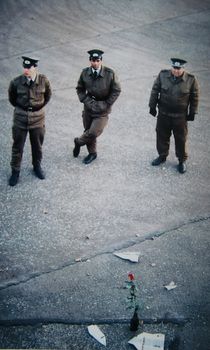 Runners planning to take part in the Berlin Half Marathon are well advised to register as early as possible for the race.

Entry fees will rise over time, and the event accepts 30000 entries only. In 2012, the race was sold out in January already — three months before the start.

The course is mostly flat and fast on broad roads and boulevards, and it's also very attractive and interesting as it passes many landmarks in both the former West and East sectors of the city.

The start and the finish are on Karl-Marx-Allee, a monumental socialist boulevard in the eastern part of Berlin.

Along the route, participants will see, for instance, the huge TV tower on Alexanderplatz, the grand buildings on the "Unter den Linden" boulevard, the vast Tiergarten park, the Siegessäule victory column, the magnificent Charlottenburg Palace, the Kurfürstendamm boulevard, and the redeveloped Potsdamer Platz.

For many runners, however, the most memorable highlight is running through the famous Brandenburg Gate, which was not possible until 1989 when border guards and the Berlin Wall did not permit runners to run from East Berlin to West Berlin or vice versa (pictured).

Start and finish: Karl-Marx-Allee, near Alexanderplatz

Entries: online; entries close 17 March 2013 or when race limit of 30000 runners has been reached

You get: finisher medal; massage service at the finish; certificate and results list by post; baggage storage

Showers and changing facilities: in tents near the finish