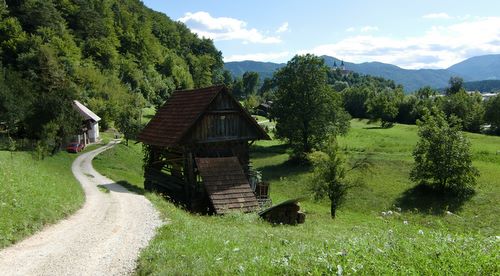 The popular Ultra Maraton Logarska dolina in Slovenia offers a number of scenic point-to-point running races, from 17 to 75 kilometres long, all finishing in the picture-postcard Logar Valley (Logarska dolina) in the Kamnik-Savinja Alps.

The start of the 75K ultra marathon is in the town of Celje. The shorter races start en route.

Most of the course runs along the beautiful Upper Savinja Valley. Participants run upstream beside the River Savinja - mostly on paved roads, partly on trails. The roads are not closed to traffic.

At three kilometres before the finish line runners turn left into the Logar Valley.

The route is undulating and overall uphill. The 75K ultra marathon features around 2300 metres of climbing and 1750 metres of descent!

Distance: 42km; start at 9.00 in Mozirje at the flower park "Mozirski gaj"

Finish: at the "Penzion Na Razpotju" in the Logarska dolina (Logar Valley)

* Runners who start in Celje can finish the race (with timekeeping) in Mozirje (33km) or in Luče (58km).

Entries: online until 28 August 2012, payment by bank transfer (foreigners can pay the entry fees in cash in the race centre); late entries until 1 hour before the start

You get: T-shirt, bus service from Celje to the start areas (at 7.00), transport of personal clothing to the finish, 15 feed stations along the course, finisher medal, lunch after the race, bus service back to Celje (in the afternoon),