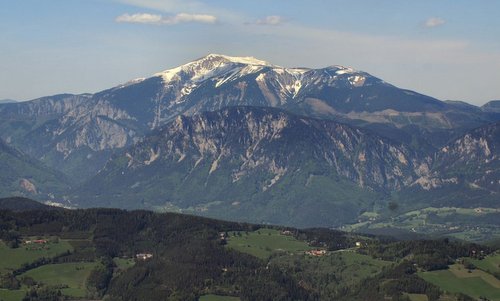 The Schneeberglauf in Austria is a 10km uphill mountain running race against a historic steam train, the Schneebergbahn. The route features approximately 1200 metres of ascent.

The start is in the resort of Puchberg, located about 75 kilometres from Vienna. Participants run at first on asphalt roads, then on dirt roads, and at the end on mountain trails.

The finish line is at an elevation of 1800 metres at the summit station of the railway on Schneeberg (2076m).

Last year, almost 400 mountain runners took part in the race. The top finishers were David Schneider of Switzerland (54:46) and Carina Lilge-Leutner of Austria (1:12:54). Twelve runners beat the Schneebergbahn, which finished in 1:06:15.

Finish: at the train station on Schneeberg (1800m)

Entries: online (until 27 Sep 2012), payment by bank transfer; late entries on the day

You get: transport of personal clothing to the finish, two aid stations on the course and one at the finish, fleece blanket, free use of the Schneebergbahn from the finish back to Puchberg

Prizes: to the first 3 M/F and to the winners of each category

Award ceremony: 15.00 in the Schneeberghalle in Puchberg