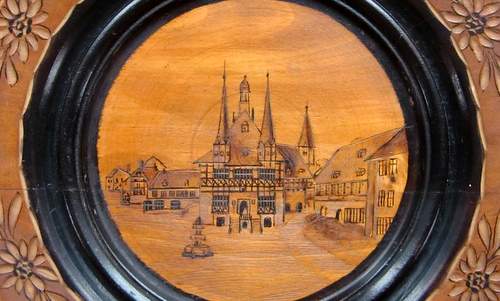 Runners can pick up their bibs in Wernigerode's Rathaus (wood carving, 1936).

The Harz-Gebirgslauf brings runners to the densely-wooded Harz mountains, located on the former border between East and West Germany.

Last year's event had over 2700 participants.

Around 650 of them took part in the 42.2km Brocken-Marathon, a very challenging up-and-down mountain running race which features over 1000 metres of climbing (and the same of descent). Most of the route is on dirt roads and trails.

Start and finish are on the edge of Wernigerode, a picturesque town with many colourful half-timbered buildings and a fairy-tale castle on a hill above town.

Competitors run up to the summit of the Brocken (1141m) — the Harz's highest peak — and down again on the other side of the mountain. As it is often very cold and windy on the Brocken runners are well advised to carry gloves and a hat with them. The time limit to complete the course is six hours.

In addition to the marathon, the event offers 22km and 11km races (which are also very hilly), an undulating 5km run, a 2km children's run, and two walking routes.

You get: chip timing; finisher medal (42km and 2km run); beer and soup after the race; child care; accommodation option in the sports hall (before the race; € 2)