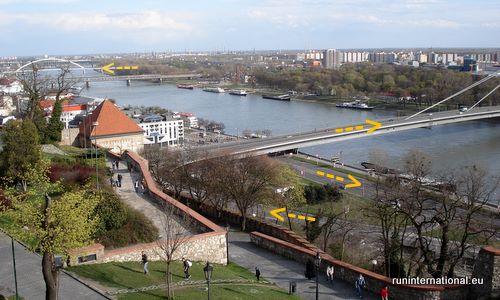 The quickly-growing and well-organized Bratislava Marathon, held annually in spring in Slovakia's capital city, offers various races for all ages and abilities.

Most media attention will focus on the marathon and the half marathon but there will also be many participants in the half marathon relay (four runners), the 10K, the 5K, the children's races and the inline skating competition.

The full marathon consists of two loops of a 21.1km course, which is AIMS-certified.

Start and finish are at the newly-built Eurovea Galleria, a multi-functional complex with retail malls, office spaces, luxury appartments and a five-star hotel, situated on the River Danube, approximately 1.5km to the east of Bratislava's historic centre.

At first, participants run a long loop on roads and bike paths around the vast Petržalka housing estate in the southern part of the city. They come back to the start/finish area and then run a short loop through Bratislava's very pretty old town.

The route is mostly flat and fast. However, the course includes two very impressive Danube bridges, and running up the ramps of the bridges is a real test of strength.