The Fužine Half Marathon in the Gorski Kotar mountains in Croatia is a small event with around 100 finishers but due to a generous prize fund it has attracted a fair number of elite runners. 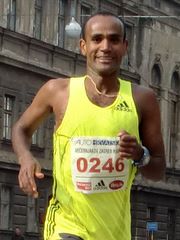 Last year's top finisher was Ashenafi Erkolo of Ethiopia (1:10:43), winner of the Budapest and Zagreb Marathons 2010 and of the Bratislava Marathon 2011. The first woman across the line was Barbara Belušić of Croatia (1:25:39).

The event takes place in the village of Fužine, which sits at an elevation of 730 metres in a densely forested region, about 35 kilometres from the Adriatic port city of Rijeka.

Located at the 7km-long "Bajer" reservoir, Fužine is a popular tourist destination, largely among Croats. It's easy to reach as it's on the motorway (and on the railway line) from Zagreb to Rijeka.

Starting and finishing in Fužine, the undulating route takes runners to two reservoirs and to a small lake.

Start and finish: at the restaurant "Bitoraj"

Entries: by e-mail or fax; payment by bank transfer

You get: T-shirt, medal, lunch after the race