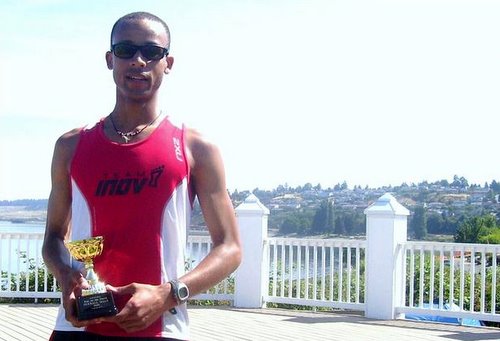 Joseph Gray from Lakewood, Washington State, has won the U.S. Title 2009 on an up-and-down course by a comfortable margin, leaving all pre-race favourites like Rickey Gates or Eric Blake far behind. The 25-year-old is the youngest in the U.S. team and just in his third mountain running season. In 2008 he helped his national team to win a Bronze medal at the World Championships in Switzerland.

Joe is an accomplished steeplechaser and has impressive personal best times in the 5km (14:15) and 10km (29:30). His half marathon time stands at 1:06:16. He's now preparing for the World Mountain Running Championships in Italy in September.

R.I.:  Congratulations to your first major title, Joe! Were you surprised to become US Champion?

Joe: I was very excited about the win, however not surprised. I felt great, and days prior to the race I knew I could win, and I knew I had a lot to prove after placing 4th at last year's National Championship.

R.I.:  Have you improved within the last year?

Joe: I have greatly improved from where I was last year at this point. I had been dealing with a lot of new things going on in my life with moving and trying to settle back in Washington State so it was a stressful time. This year I was able to travel to mountains for training more than I was last year when I lived in Oklahoma.

R.I.:  Do you still participate in track and road races?

Joe: I race everything these days, from mountains to roads to track to cross country, which is by far my favourite type of race.

R.I.:  What is it that you like about mountain running?

Joe: I love the mountains for the beauty you can see while racing and after. It's not like road running where all you will see is concrete the entire run and buildings. I also love mountain running for its challenge, it's different from any race. You are pretty much at the limit the entire race, so it's a true test of heart.

R.I.:  You live in Lakewood in the far north-west of the US, close to the Pacific. Is that a good place for running?

Joe: It's a great place for running where I live. We do not have super long trails or very high mountains very close to me but just across the water lies the Olympic Peninsula known for having a ton of peaks and technical terrains.

R.I.:  Where do you run in Lakewood? Do you have to drive out of town?

Joe: I usually don't have to drive to train, I don't give a lot of importance to running on trails, roads are fine with me. I do a mixture of roads and trails. I usually run between 60-70 miles per week (ca. 95-110km) and I run nearly every day except on days where I have to work long hours. On those days I run enough by being on my feet at work, hahaha.

R.I.:  How many hard training sessions per week do you do?

Joe: I try to keep it down to one a week because I really focus on enjoying my running now. I used to be a believer that you needed three workouts a week but I didn't enjoy my sport back then. Of course at times you need more than one, but not usually.

Joe: I hate cross-training on machines, but I do love to cycle on occasion as well as play basketball or football. I have a lot of awards for basketball which was my first loved sport. After every season I will take 2-3 weeks break and during that time I will just have fun, usually playing basketball. My father and I have some good battles, at age 51 he is still able to make it interesting, hahaha.

R.I.:  When are you coming over to Europe?

Joe: I will be in Europe in August and I will compete in mountain races from northern Europe all the way to southern Europe near the Dolomites and Alps. I love to travel, so I try to see the world when I race overseas.

R.I.:  In 2008 you finished 16th in the World Mountain Running Championships in Switzerland. I know you are very ambitious. What are you aiming for this year?

Joe: Last year I was quite ambitious. I wanted to do well, so my team could win the gold medal. Italy just was too strong and deserved the win. This year I have the same goal, I want to lead my team to a gold medal. I'm looking to place in the top 15, whatever it takes to get my team a gold medal. I can only promise that I will do my best and that I will finish well.

R.I.:  Last year your team mate Rickey Gates took his bike and a tent to Central Europe and cycled from race to race. Will you do the same?

Joe: Rickey is quite the traveller. I'm afraid to say that I won't be doing the same, I'm not quite as brave as him. I'm already afraid of the traffic in some areas of Europe so I wouldn't be able to ride a bike anywhere too long, hahaha.