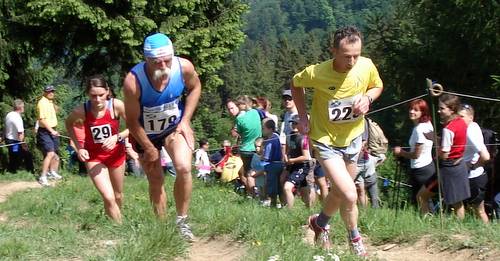 The Slovene Mountain Running Cup series has started with a 4.7km race to the top of Mount Osolnik.

The Slovene Mountain Running Cup is a series of seven races, held from May to October. Two of them, the Grintovec Race in July and the Šmarna Gora Race in October, form part of the World Mountain Running Grand Prix. The events are open to runners from all countries.

Mountain running is immensely popular and highly regarded in Slovenia and many runners focus exclusively on the mountains. The Osolnik Mountain Race has shown how many young runners like the sport, and that a new generation of strong mountain runners is developing in the country.

The race started off in the small village of Godešič, 20 kilometres from the capital Ljubljana and just four kilometres from Škofja Loka, one of the oldest and most beautiful small towns in Slovenia.

At first, the race followed a narrow and mostly flat road to the foot of Osolnik.

From there, it was all uphill through lovely woods to the top of the hill at an elevation of 858 metres - an elevation gain of 535 metres on the last 3 kilometres.

The route was entirely on well-marked trails with moderate climbs and a few flatter sections. With 250 metres to go, the course was very flat and fast but then came this sheer climb. The church on top of the hill still towered high above.

Fortunately, cheering crowds of walkers lined the last part of the route and helped the competitors to cross the finish line in style.

Most ordinary mortals will find it difficult to understand how some runners, like the winner Simon Alič (38), could run from start to finish. Most participants walked considerable parts of the route.

Lucija Krkoč is just 21 but has already shown her potential on the international stage by winning the European mountain running junior title in 2007. Although she has trained only very little because of a long-lasting knee injury she beat a strong field of women runners. She won the race with ease, ahead of the experienced Slovene international Valerija Mrak (38). Kaja Obidič, just 18 years old, came third.

Overall, 111 men and 27 women conquered the mountain. In addition, 52 children and 23 juniors made it to the top. They had started a bit further up, closer to the finish.

These are the first five ladies on top of Osolnik 2009: 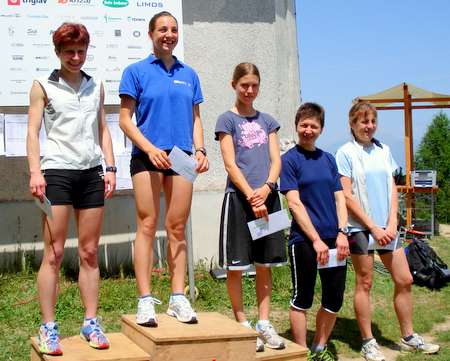 And the first five men:

After such an event you certainly need some fresh clothes. Therefore, each runner got a T-shirt and a pair of clean socks. There were more than enough fruit and cakes to feed an army of starving mountain runners, and plenty of prizes as well. The views of the surrounding hills and mountains were marvellous. The entry fee was eight Euros.