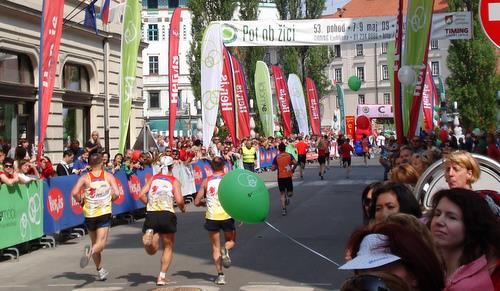 Over 4,000 runners flooded the streets of Slovenia's capital in remembrance of the liberation of Ljubljana in 1945.

Every year, thousands of Ljubljana's citizens take part in the 'pohod', a traditional walk along a 33km-long footpath around the city. The so-called 'Pot', the Path of Remembrance and Comradeship, follows the line where a barbed wire fence surrounded the city from 1942 to 1945. It's estimated that this year more than 20,000 walked up to 35 kilometres to mark the anniversary of the victory over fascism.

The Tek trojk (Troika Run) is for those who like it a bit faster. In this event, you need to form a team of three runners and run 12 or 28km. Students run 3km. All team members have to cross the finish line together. It's not possible to run as an individual.

For most runners, Tek trojk is a social event and great fun. Many runners formed a mixed team of males and females and enjoyed the atmosphere on the beautiful Prešeren Square, the traffic-free route through the city, and the shady woods on the Golovec hill. There were no entry fees, every runner got a T-Shirt, the partisan choir provided the suitable melodies, and in the evening there was a live concert.

Others, however, took it more seriously. Some athletes found it difficult to run in a team and left slower team members behind. However, they had to stop and wait shortly before the finish as they were not allowed to cross the line if the troika was not complete.

This year, the men's 28km race was won by an outstanding team of three elite runners: Roman Kejžar, Tone Kosmač and Mitja Kosovelj. 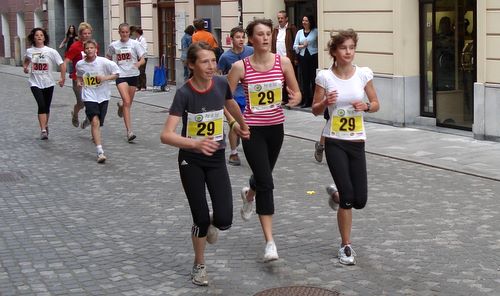