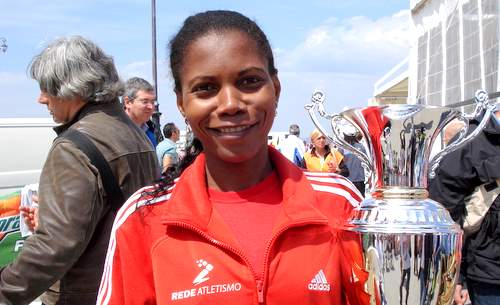 Nadir Sabino de Siqueira of Brasil, winner of the Maratona d'Europa 2009 in Trieste, has shown that she is also a great marathon runner.

The friendly 39-year-old of the Rede Atletismo team has so far been a 10,000-metre track specialist with a personal best time of 33 minutes 53 seconds. She was Brasilian 10,000m Champion in 2002 and finished third in this year's Brasilian Championships in 34:29, just one week before the marathon in Trieste. She is also a successful 10k road runner and half marathoner.

R.I.: Nadir Sabino, well done. What a trophy - it's almost as tall as you!

Nadir Sabino: Oh, no! At home I have one that is much taller than me.

Nadir Sabino: I found the hills in the middle of the race very difficult. I was on my own, and I got some pain in my hamstring and struggled with that for the rest of the race.

Nadir Sabino: Yes, it is. This was just my second marathon, and I didn't finish the first one.

R.I.: How did you prepare for the marathon?

Nadir Sabino: I was in Paipa in Colombia for one month of altitude training. But I did just two long runs of 2.30 hours.

R.I.: Can you give us an idea of your track training, for example a typical interval session?

Nadir Sabino: Well, of course that depends on many factors, and it varies very much. But in the training camp at altitude, to give an example, I did 24 times 400 metres in 80 seconds, with 3 minute breaks.

R.I.: Will we see you again in Central Europe?

Nadir Sabino: Of course! But I don't know yet when and where.