The 21-year-old from Ajdovščina in the Slovene Karst, European Mountain Running Junior Champion 2007, has come back from injury. 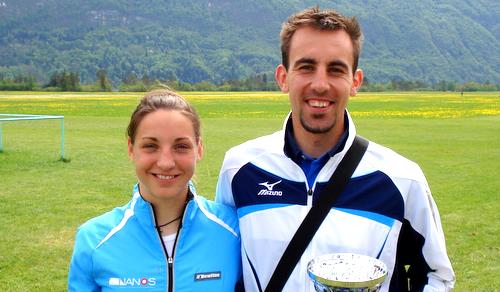 R.I.: Lucija, you have won the Bovški tek 10km race in Bovec, well done! Was it hard?

Lucija: Yes, it was. I was quite out of breath. This was my first race this year. I couldn't run for seven weeks and missed most of the base training over the winter because of a knee injury.

R.I.: Can you take part in any major competitions this year?

R.I.: How do you train now for the next races?

Lucija: I'm glad I have a very good coach who knows how to prepare me well. He's the father of my training partners Mateja and Mitja Kosovelj. We do long off-road runs in the countryside. And about twice a week, we do some intervals on the track, for instance ten times 1000 metres with a one minute break. But that depends on the time of the season.

R.I.: And what about the training for mountain races?

Lucija: Actually, we don't do any training in the mountains.

R.I.: How often do you go running?

Lucija: I run every day but only once a day. I'm studying sport at the university in Ljubljana and couldn't do any more training.

R.I.: Is there any running event in Slovenia that you like particularly well?