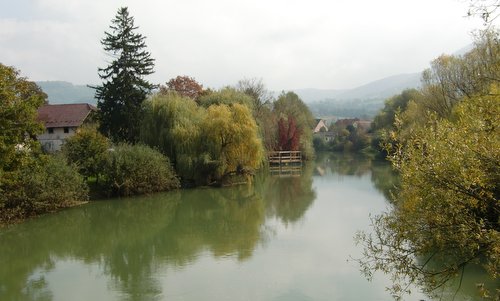 The Kostanjeviški tek (Kostanjevica Run) forms part of the Teki Dolenjske race series which is held every year in the rolling hillls of the Dolenjska (Lower Carniola) region in Slovenia.

Participants run a challenging 9k multi-terrain course which includes about 120 metres of ascent (and the same of descent).

Approximately 5.7 kilometres of the race are run on asphalt roads, 2.5 kilometres on gravel roads and 800 metres on trails.

The start and the finish are at the primary school of Kostanjevica na Krki, Dolenjska's smallest town with just about 700 inhabitants. It is also the oldest town in the region, founded in the 13th century on an island in the River Krka (pictured).

The route runs through lovely countryside and little villages, and it also passes the imposing Kostanjevica Abbey.

Number of finishers in the 9k race: