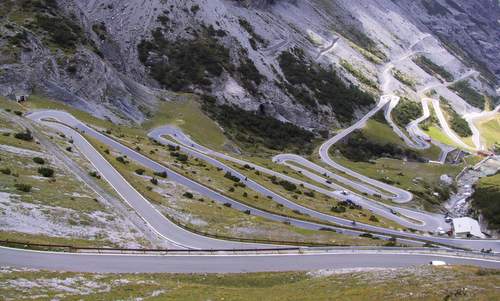 The Stelvio Marathon is a mountain running event in South Tyrol, an autonomous province in the far north of Italy where most residents are native speakers of German.

All three routes finish on the Stilfserjoch (Italian: Passo dello Stelvio). Situated at 2,757 metres above sea level, the Stelvio Pass is the second-highest paved mountain pass in the Alps. It has featured twelve times in the Giro d'Italia bicycle race.

The 14km route begins at an elevation of 1,577 metres in the hamlet of Trafoi and takes runners through 45 hairpin turns of the Stelvio Pass Panorama Road, one of Europe's most impressive mountain pass roads (pictured).

The 26km and 42.2km races are started further down in Prad am Stilfserjoch (Italian: Prato allo Stelvio) which sits at an elevation of 915 metres in the Vinschgau (Val Venosta) valley. Both routes are a mix of asphalt roads, gravel roads and hiking trails.

The difference between these two races is that the 42.2km marathon begins with an undulating loop through the valley whereas the 26km route heads straight up to the Stelvio Pass.

In addition to the races for mountain runners the event offers a 26km Stelvio Hike (German: Stilfserjoch Marsch; Italian: Marcia Stelvio). Only hikers are allowed to use trekking poles.

Map of the venue (start area):