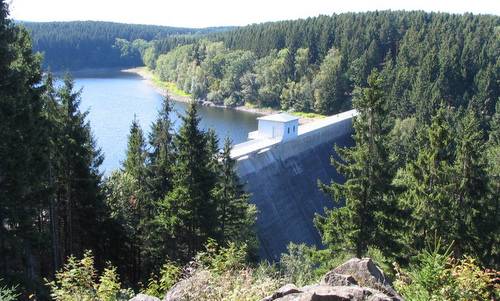 Starting in the town of Wernigerode on the northern edge of the mountains and ending in Nordhausen which lies just to the south of the Harz, the route features 1,090 metres of ascent and 1,200 metres of descent.

The highest point on the course is at an elevation of 600 metres on the summit of the Poppenberg.

The race is run mainly on trails and gravel roads. Just a few portions of the course are on asphalt.

Competitors run up and down a series of forested hills, through a couple of little villages and across the Zillerbachtalsperre (Zillerbach Dam; pictured) which offers fine views of one of the many reservoirs in the Harz.

In addition to the 53km ultramarathon, the event incorporates a 26km race from Wernigerode to Benneckenstein, a small town located in the heart of the mountain range, and a 30km race from Benneckenstein to Nordhausen.

After-race bus transportation to the starting line is provided by the race organizers.