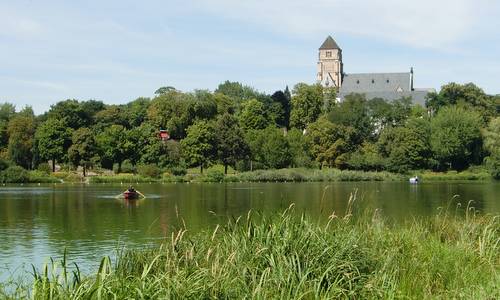 Held in the sports-mad city of Chemnitz in eastern Germany, the Küchwaldlauf offers a multi-terrain 10km race, a 1.3km run, and a 400m run for the kids.

The event takes place in the wooded Küchwald park, a popular recreational area which is home to a narrow-gauge railway, a ‘Kosmonautenzentrum’, and a botanic garden. The park is situated in the very green Schlosschemnitz district in the northern part of the city, near the Schlossteich lake and the Schlosskirche (pictured).

The route is rather unusual. Starting and finishing on the 400-metre speed skating rink of the Eissportzentrum, competitors run three laps on the oval, followed by a challenging 3.6km loop through the park, another loop on the ice rink, and a second loop in the park. Overall, the route features about 80m of ascent and 80m of descent.

Race centre: in the Eissportzentrum (from 8.00)

You get: certificate (online)

Prizes: certificates to the first 3 in each category