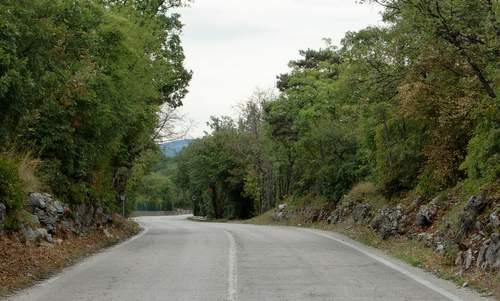 La Mezza di Aurisina is a long-standing half marathon road race, held on the wooded Karst Plateau near the port of Trieste in the north-eastern corner of Italy.

The race begins and ends in the village of Aurisina (Slovene: Nabrežina) which is in a region that is home to a substantial minority of Slovenes. The border with Slovenia is just about six kilometres away, and thus the event attracts a large number of Slovene runners.

The route is out and back and very undulating.

Unfortunately, the course is not closed to traffic. The first (and the last) 6.5 kilometres are run on the rather busy ‘strada provinciale del carso’ (SP1), and on your way back to the finish line you can expect a fair bit of car traffic.

The fine finisher buffet and the pasta party, held after the race in a small park, compensate for any inconveniences.

Deposit for the bib:

Event details (in Italian and Slovene):