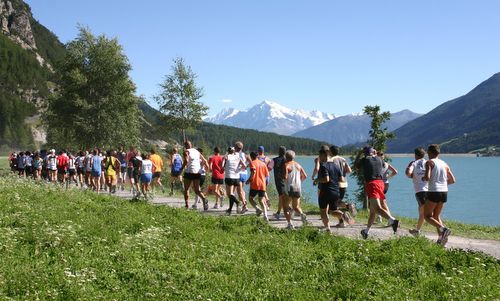 Held in Italy's amazingly beautiful alpine province of South Tyrol (where most residents speak German as a first language), the Reschenseelauf attracts an international crowd of 3000 runners every year.

Starting and finishing in the village of Graun (Italian: Curon), the route is a 15.3km loop around the Reschensee (Lago di Resia), a 6km-long reservoir that sits at an elevation of about 1500 metres on the borders with Austria and Switzerland.

The race follows a very scenic lakeside cycle route. The first 5km are rather flat, the next 6km are undulating, and the final 4km are flat again.

Approximately 12km are run on asphalt, and 3km on gravel.

To avoid congestion on the course, competitors are started in five groups (in intervals of six minutes). Runners are free to choose which group suits them best.

In 2013, Milan Kocourek of the Czech Republic set a new course record of 48min 17sec. Germany's Simone Raatz was the first lady across the line (58min 15sec). Roland Ruepp from South Tyrol won the handcycling race in a time of 31min 26sec.

Start and finish: near the church tower in Graun-Curon

Entries: online or by fax (up to 11 July 2014); late entries on the day; race limit (15.3km): 3000 runners; entrants from Italy must provide a medical certificate at registration

You get: a towel, goodie bag, chip timing, massage service after the race