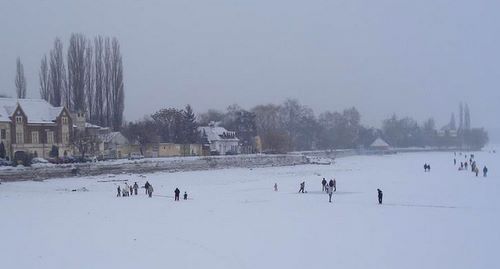 In August, it will probably be much warmer on Tata's "Old Lake".

Tata is easy to reach by train as it's on the railway line Vienna-Budapest.

The Minimarathon is a long-standing high-summer running event. Held on a Saturday afternoon in early August, you can expect high temperatures during the race.

The route is very attractive as it runs through the old town, past the 14th-century lakeside castle, along the promenade of the 2.5-kilometre-long "Old Lake", and through the leafy "English Park" which surrounds the "Small Lake".

Over the years, many outstanding athletes have taken part in the race. In 2010, the winners were Salvatore Concas of Italy (43:40) and Fruzsina Szekeresné Bakonyi of Hungary (54:27).

Start and finish: at the Cultural Centre Tata

You get: sandwich party on Friday evening; T-shirt to the first 1000 finishers