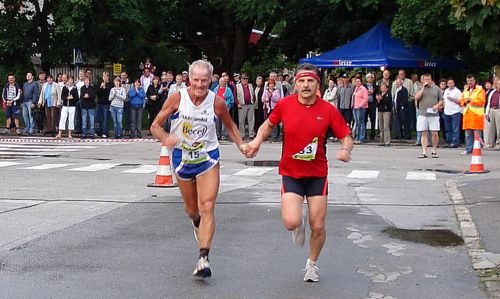 Slovenes celebrated their country's independence from Yugoslavia with running events all over the country.

Numerous sports events were staged on the Slovene Statehood Day on the 25th of June, and many runners took part in a road or mountain race to commemorate their country's declaration of independence from Yugoslavia in 1991.

Runners from other countries joined in as well, like Lisa Stublić from Croatia, who won the women's 4km Ormož Night Road Race in the small town of Ormož in the east of the country. The 25-year-old middle distance runner grew up in the United States and moved to her father's home country in the beginning of 2008. Slovenia's half marathon champion and steeple chase record holder Daneja Grandovec (25) came second. Ashenafi Erkolo (25) from Ethiopia, who is based in Hungary, is a regular guest in running events in Central European countries, and more often than not he comes home first. In the 4.8km men's race in Ormož he finished in a very fast 13min 55sec - a pace of 2min 54sec per kilometre. The race followed a mildly undulating route. Woman did five laps, and the men six laps.

Like the Night Race in Ormož, the Half Marathon of Statehood in Celje was held on the eve of the public holiday. Ida Šurbek, 49-year-old masters elite runner, delivered another outstanding performance by winning the half marathon in 1:20:44 and finishing second overall, just two minutes behind the male winner Marjan Rozmarič (41). The race took the runners from the outskirts of Celje, Slovenia's third largest city, on a rural out-and-back course to a pretty lake 5 kilometres further north. The event saw 186 competitors, 102 of them in the supporting quarter marathon.

Just one day after her first place in Celje Ida Šurbek showed no sign of fatigue and lifted the trophy of the Radovljica Road Race as well. Women ran six laps (about 1.1km each) through Radovljica, a charming small old town at the foot of the Julian Alps, built on a terrace 75 meters above the River Sava. Men had to complete eight laps. Pre-race favourite Peter Letnar (30), who represented Slovenia in the 5000 metres in the European Team Championships in Norway five days before, was the first to cross the finishing line at the "Lime Tree of Independence". 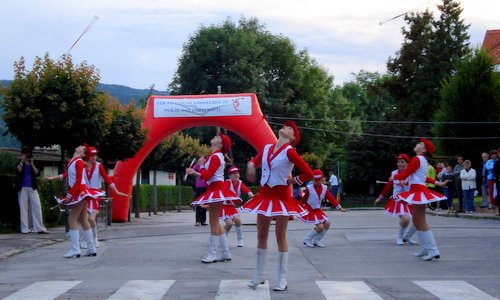 Mountain runners faced the difficult choice between an uphill road race in the Alps and a short and much steeper race in the Slovene Karst, close to the Adriatic Sea.

The steep and tough races suit Simon Alič (38) best. He is a regular winner of such events. Thus, he decided for the Mala Gora Mountain Race and won this 4.8km trail race with an elevation gain of 700 meters. First lady on top of Mala Gora (1034m) was another mountain running specialist, Mihaela Tušar, 44 years old and still almost always on the podium.

Those who prefer longer mountain races with a gradual climb travelled to the ski resort of Kranjska Gora in the Julian Alps. The Vršič Mountain Race started at an elevation of 810 metres and followed a course of about 12km along the road up to the top of Vršič, Slovenia's highest mountain pass at an elevation of 1611 metres. Peter Lamovec (25), several times Slovene representative in European and World Championships, won the race in style. Vesna Ražman (29) defended her title but Polona Kukovec was close on her heels and finished just 19 seconds behind.