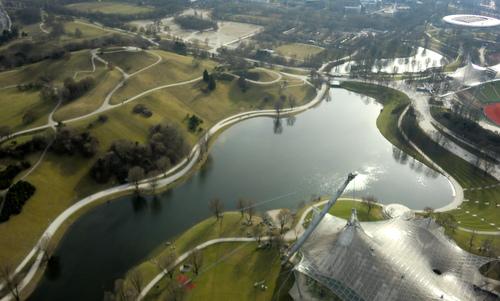 The Sommernachtslauf München ("Summer Night Run Munich") takes place in the Olympiapark which was built for the Olympic Games 1972 in Munich, Germany.

Two races are on offer (5.3km, 10km), both starting at 7.30pm on the Aufwärmplatz (warm-up athletics track) next to the Olympiastadion (Olympic Stadium).

You can still decide after the first five kilometres if you want to finish after one lap (5.3km) or after two laps (10km).

The route crosses the Olympiaberg hill, which is a bit of a challenge, but it's well worth the effort because the hill offers excellent views of the Olympiasee (Olympic Lake) and of the many sports venues in the park.

Around 1,500 runners took part in the Sommernachtslauf last year. Daniel Lenz was the fastest 10k finisher in a time of 34min 23sec. Katrin Esefeld led the women across the line in 40min 38sec.

Start and finish: on the Aufwärmplatz athletics track, next to the Olympic Stadium and the Werner-von-Linde-Halle

You get: finisher T-shirt (not guaranteed for entries after 15 June), drinks on the course and at the finish