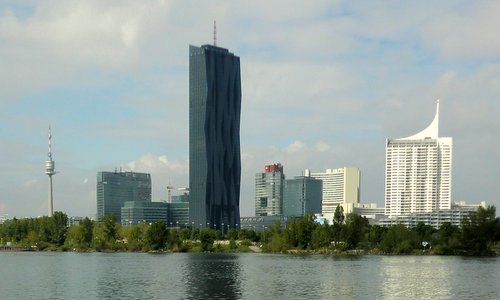 The Vienna City Marathon is one of the biggest spring running events in Europe.

So, as all races kick off at the same time, you can expect a crowd of about 25,000 runners waiting for the gun to go off at the start line in the Donau City, an imposing complex of office blocks and towers on the River Danube (pictured).

In 2016, the race features a slightly modified course. The finish line will be at the Burgtheater on the imperial Ringstraße, approximately 5km from the start area.

The route visits many of Vienna's most popular sights — the Danube, the famous Ferris wheel, the wooded Prater park, the Donaukanal, the Schönbrunn Palace, and the many impressive buildings on Ringstraße.

The course is mostly flat and fast. The difference between the lowest and the highest point on the course is about 44 metres.

Unfortunately, running in Vienna doesn't come cheap. The entry fees range from €52 up to €82 for the half marathon and from €67 up to €105 for the full marathon — not including the extra fees for the timing chip, the carbo-loading party or a T-shirt.

Start: at 9.00 on Wagramer Straße (at the Vienna International Centre, or ‘UNO City’)

Finish: on Universitätsring (at the Burgtheater)

Timekeeping: ChampionChip — use your own chip or buy a single-use chip (€ 5)

You get: fruit and drinks on the course, finisher bag